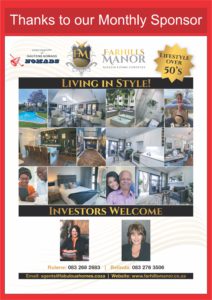 MONTHLY GAME:
Isn’t it amazing how many times, in the past five years, we have been washed out at either our December or our January game! This January was no exception and many thanks to Bryanston for being able to accommodate us before our February game. Unfortunately, the greenkeeper had already planned the treatment of the greens for the Monday after our game, which was rained out. This meant that we couldn’t experience the normally perfect and speedy Bryanston greens in all their glory. Be that as it may, the tees were beautiful, the fairways were immaculate, there were lots of towels and hot water in the changerooms and the Forward Tees were generally very fair. Thanks again Bryanston Country Club.

According to the last timesheet there were 124 players in the field and that bodes well for the rest of the year. It was great to see at least four Northerns in the field and it was good to see Heinz Abt, Ron Panaino, Dave Renaud and Ray Germs back in the field after some time away. Thanks to Hennie Ehlers who came out, after his knee op, to start the field; that’s what Nomads is all about.

My fourball stood on the 9th tee (which was our last hole) and both of our opponents had a total of 20 points. No thought of the Matchbox but Eugene Marx said “Even if I have a Hole in One” I will still get back two shots next month!” He had just one practice swing with his nine iron, made what looked like a perfect swing, one bounce just short of the pin and in it popped. This was to record his first Hole in One ever; he was like a puppy with six tails. Many thanks for the drink Eugene, I’m not sure how the barmen controlled the tab and lets hope it wasn’t too high!

Well done to Dave Renaud on receiving his 20-year tie and to Graham Bishop and Barry Bruton their 5-year ties. Congratulations to Doug Watson on being awarded his 400 game badge (this was done over a period of 35.25 years at an average of 11.35 games per year) there aren’t too many of those countrywide. Tulio Coelho was awarded his 200 game badge and Eugene Marais and Mark Rondi their 100 game badges.

Thank you to Sean Ledden for doing the fines session. Remember to always include a group fine even if it is only R5.00 or R10.00, well done.

Natal Nomads on the passing of Brian Shagam, he was their last remaining Founder (circa 01/64, a 51-year Nomad member). I guess this will happen to all Clubs at some time but I do believe that Natal is the first Club to have this happen.

Thanks to the Executive Committee for the Prego style chicken rolls after the prizegiving, we were certainly well catered for and they really were superb blotting paper.

We have had possibly the most ever resignations in one month at Transvaal/Gauteng Nomads and regrettably we have to say goodbye to Frank Booth, Marius de Jager, Fernando Guilherme (may transfer to Botswana), Norman Murray, Mike Ulyett and Johan van Wyk. We wish all of you God speed in your future endeavours and perhaps one-day you will see your way clear to come and join us again.

It’s almost time for Bev to run her 1st Golforama tournament and she is still looking for help from Thursday the 26th February up to and including Sunday the 1st March, especially on the Thursday and the Friday. If you can help, for even one day, please give Bev a ring right now, she needs all the help that she can get. In fact if you would like to bring a friend along to help out, they will be welcomed and taught everything they need to know quite quickly.

The Mystery Tour is still on for the 10th April. There are a few spots still available and Andrew Mostert is waiting for your call to him on 082 4430894. This is a really fun day, if you can get up that early, so ring Mossie right now.

THE GOLDEN YEARS (or ANOTHER SENIOR MOMENT)

Several days ago, as I left a meeting, I desperately gave myself a personal search. I was looking for my car keys. They were not in my pockets. A quick search in the meeting room revealed nothing. Suddenly I realised I must have left them in the car. Frantically, I headed for the car park. My husband has scolded me many times for leaving the keys in the ignition. My theory is the ignition is the best place not to lose them. His theory is that the car will be stolen.

As I scanned the car park I came to a terrifying conclusion! His theory was right. The car park was empty. I immediately called the police. I gave them my location, confessed that I had left my keys in the car and it had been stolen.

Then I made the most difficult call of all. “Hello My Love”. “I left my keys in the car and it has been stolen.” There was a period of silence. I thought the call had been disconnected then I heard his voice. He barked, “I dropped you off!”

Now it was my time to be silent. Embarrassed, I said, “Well, come and get me.” He retorted, “I will as soon as I convince this policeman that I have not stolen your bloody car.”

This is what they call, “the Golden Years!”