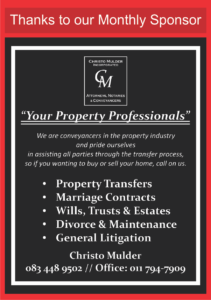 After having attended the National Council Meeting on the Saturday, we were ready to kick off the tournament at Knysna Golf Club with flag raising at 18h00. The drought being experienced in the Southern Cape was quickly ended by talk of a National Tournament being held in the area. Flag raising over the last few years has traditionally been conducted in the rain and 2016 was no different. Notwithstanding the conditions, it was a privilege to raise the Gauteng flag to our National anthem.

I would like to thank Michael Payne on a well organised event. I was responsible for the 2012 and 2013 Nationals and can attest to the amount of administration involved in getting 39 players to the tournament. I can also recall the frustration when you open your inbox and are greeted by the words, “unfortunately due to unforeseen circumstances I will not be able to attend this year’s tournament and will have to withdraw. By the way, when can I expect my refund.” After having received several of those, we managed to field 35 players of our allotted 39. As a consequence, our allocation for Nelspruit will be around 36 players. With three automatic qualifiers and two Captain’s picks and considering the proximity of the tournament I would suggest that when the entries are released later this year you enter immediately. Congratulations to Alec Saunders who played in his 44th National tournament and to Jimmy Sales who was playing his 45th consecutive Nationals.

There was consensus that the glory bag handed to each player on registration was one of the best we have seen. The bag and its content were sponsored by Southern Cape Nomad, Braam Van Huyssteen (the owner of Tekkie Town). It is difficult to explain the amount of work and sponsorship involved in arranging a tournament of this size and the attention to detail from Flats and his team was unbelievable.

Sunday was a superb day for golf and the weather held out for the day. The conditions were reflected in the scoring with most of guys scoring in excess of 30 points. Pino Gerin managed our highest at 36, with 35 from Terry White and 34 from Sean Ledden. I was only due to tee off on Monday morning and that’s when the rain started. I managed 9 holes in the pouring rain and wind and finally the misery was over with the morning play being suspended and the afternoon field being cancelled and given 28 points. With the 3 hole scoring system being used for the morning, the field scores were terrible. John Brewin and his partner won best playing pair on 57 points. Tuesday was another good day for golf and our round two winner was Glen Dalton on 35 points. After round one we were 6th in the Bert Hunt and slipped to 7th after round two.

Every evening is hosted by one of our National sponsors and some interesting statistics were mentioned. Imperial thanked Nomads for the 250 vehicles which had been purchased during the year. Europcar and Tempest were seeing good increases in usage through Nomads. Please remember to use the link on our website to book your vehicles. Glenbrynth mentioned that SA was the 8th biggest whisky market in the world (7th after Nationals).

Wednesday and Thursday were both good golfing days. Day 3 honours being shared between Glen Dalton, Dawid Ferreira and Sean Ledden on 35 points. After the third round Gauteng had slipped further down the standings to 11th. There was a genuine chance of us being 12th come Friday evening. With the week starting to take its toll on the guys, our cause was not helped by four scores of 20 and less. Sean Ledden (20), Sheldon Botha (19), Jamie Gowans (17) and Nic Du Toit (17). As it turned out, a 37 from Pat Frampton, 34’s from myself and Alec Saunders and a couple of 30 plus from some others, we managed to move up to 10th overall at the close of the tournament.

Finally – thanks to each and every player for your participation, support and attendance at prize-giving. What a great bunch of guys to tour with. To the wives that attended, I hope that you all enjoyed the week and will join us again at Nelspruit.